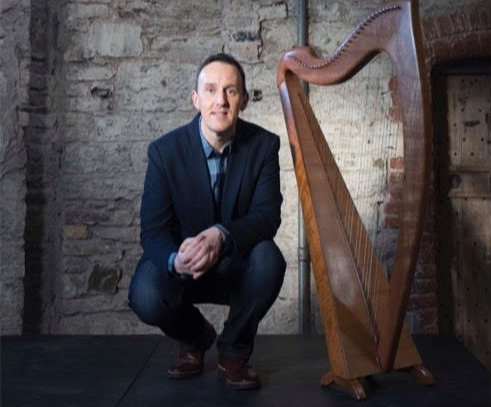 Although our current situation has confined us to the dreaded Zoom call, it has granted us the opportunity to connect with others (if you’ll pardon the pun). Therefore, in the most 2020/2021 fashion, I had the pleasure of talking with composer Michael Rooney about all things music, from his compositional processes to his live-streamed performances.

How has lockdown impacted your day-to-day musical life, particularly in a performing capacity?

The first lockdown was brutal from the point of view of music, and creatively I was really unproductive. I didn't even try and do anything from say March to August, but since we went back to school in September, I've been busy writing music. I have no excuses this time. The first time around you could feel sorry for yourself, second time around, you just have to get on with it. I teach every two weeks online and that's been really interesting. I used to teach face to face on a Thursday night, now I do a Thursday and a Friday night, and I have people from all over the world coming in on the one Zoom. I find that really interesting, it's a completely different kettle of fish. I get all my students to send me video or audio clips of their work afterwards too, and I give them back constructive criticism. I make my classes a bit longer now and I stop the classes for chats, because it's important that the students have some social interaction.

Of course, adapting events for online consumption is not ideal, but definitely a step in the right direction in order to ensure the survival of the arts during this time. What is your opinion regarding online concerts and live streamed events?

I suppose the correct answer is that it's great, but I'm not sure about that. It's a great opportunity at the moment for artists to record and for people to engage, but I know having done a couple, you're performing to an empty room apart from your cameramen. You need to have a lot of confidence in your own wellbeing to keep going and entertain your audience.

Due to social distancing and Covid-19 restrictions, there has been a severe decline in social interaction. How do you think this affects Irish traditional music, as the environment it thrives in is so dependent on interaction and community?

I can speak from the point of a parent whose children are not participating socially but are gaining a lot through online opportunities. My children take part in classes with Fred Finn, that's working fantastically well, and they participate in a monthly session. Their grandfather Seamus, June’s dad, takes them for singing, so that's a Zoom meeting that's religious every week. Then on a daily basis, Seamus is teaching my oldest son Irish, so there are massive opportunities. I think the world of Irish music is still going ahead, socially distanced, I can see that there are massive efforts being made.

We are delighted to have you in our Nead an Cheoil series! What can viewers expect from your concert, perhaps how you selected repertoire and the kinds of tunes played?

We made a decision after Christmas, when the second lockdown kicked in, that we were going to play every evening. June had access to a lot of new material, so she was trawling through different musical sources to get good tunes. She then started teaching me some nice music and we came up with some new sets. I suppose the concert is a mixture of some of my compositions, but we've used the IMBOLC Festival as an opportunity for us to showcase some new material. It came at the right time for us, because it was an opportunity to sit down and play together. I'm looking forward to the concert because apart from the music, we've been asked about lives musically, and I suppose you don't really think about that until someone asks. Also, for the first time ever, we've got our oldest son Eoin to play a track with us. June has been teaching him flute for the last three or four years and I've been teaching him harp. I suppose it fits in well with Nead an Cheoil, there's definitely a family feel to the concert.

The music you create as a duet is simply beautiful. As your interaction seems so flawless, do you find performing together almost second nature? Are there specific traits that you encompass as a duet?

I remember when I started playing with June, I could not believe the tone that she was getting from her flute. It was this really smooth, powerful tone and whatever way she was able to have power in a tuneful manner, and it allowed me to do things that I might not do if I was playing by myself. I knew she could carry the sound, which allowed me to do things in an improvisatory manner that I might not otherwise have the confidence to do. Even now, we spend ages trying to pick the right tunes. We will not compromise, if the tune doesn't suit the flute or doesn't sit on the harp, it won't be played in concert. June will play a lot of my compositions with me, so that's an opportunity to tell stories. If you're just playing sets of tunes that are not yours, you can only say so much about them. If they are your own compositions, you can talk about where the piece came from. We have found that your audience are more at ease if you chat to them, they’re there to be entertained, verbally as well as musically.

You have a great opportunity to create stories, something that is unique to your music.

The high that you get is incredible and it is definitely worth all the self-doubt. I wish that I could bottle up the end product and not have to go through the sheer stress, lack of sleep and angst. But say the Famine Suite two years ago, or the Four Men and a Dog concert last year, the feeling of unity with your musicians, that’s fabulous. I wish people could see the horror that's involved in getting there, it is tough because you're a prisoner to your own standards. I don't think it's arrogance, but there's an inner confidence when I know I've written a good piece. If you don't like it, how are you going to expect anybody else to like it?

CONSTANCE, in partnership with the Hawk’s Well Theatre, was expected to tour but was cancelled due to current restrictions. However, we are very lucky that we can watch this fabulous work online through the Creating CONSTANCE documentary! What can you tell us about the compositional process for this work, and the story you wanted to convey through the music?

That was a really interesting project as it was the first time I collaborated with other people. The director, Kelly Hughes, used to send me reams of writing and we would sit for hours and talk about the feel, to create what we would call programmatic music. When I was writing the first piece, Lissadell, I was thinking of a young Constance in that area, where you've got the sea and this stunning vista, so I was trying to create a soothing landscape of beauty. The most important piece to me was called Deireadh Ré, where Constance was in prison and I was trying to recreate the absolute heartbreak and sorrow that she felt when her comrades were being shot. I wanted a feel of The Parting Glass to it, I think the emotion behind it is stunning, so I wanted to think of that in terms of Constance saying goodbye to her comrades. There was a lot of depth involved in that conversation with the director, so there were opportunities to really explore the text.

Finally, what do you miss most about performing to a live audience?

I miss the sense of bringing, hopefully something spiritual and joyous to people, and in doing so bringing it to myself. The sense of fulfilment that music gives you, I miss that. I don't think that online work can bring you that. When I look at the Four Men and a Dog concert on Facebook, I miss that sense of being part of something bigger. I see the joy; I very rarely have felt that there was such joy in the room at a concert. I'm very thankful that we've had those opportunities to do that. Everything that I've had an opportunity to do at IMBOLC has been incredible, and to be able to work at a very high level is great.