Dementia Care & Wellbeing - A role for the Irish Traditional Arts 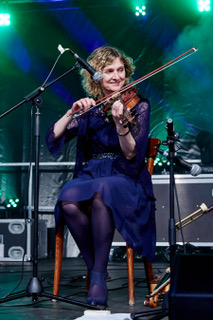 My journey as a music therapist is very much influenced by my Irish traditional grass roots in Co. Clare, most especially when working with people living with dementia. The fiddle, my first instrument serves as inspirational and guiding force when working in person-centred ways with these older people and their carers.

The Needs of People with Dementia

To explore and understand the healing power of music in dementia, one first needs to be aware of the needs and responses of people living with dementia. It is a neurological, progressive disorder that is characterised by gradual cognitive loss, impairment in abstract thinking and judgement, disorders of language, personality change and loss of emotional control. This leads to a plethora of feelings from abandonment, being controlled, frustration, sadness and anxiety, to feeling useless and worthless. Considering this dark picture, it is important to focus on what people living with dementia really need, which is a psychological need for loving kindness. Their psychological needs are both social and emotional in nature and include identity, comfort, attachment, social inclusion and personal interactive involvement in familiar activities as pictorially represented: 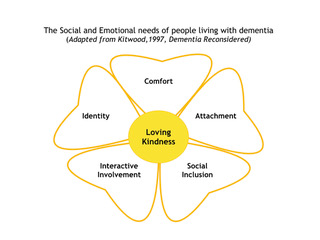 A person-centred approach is central to meeting their psychological needs to ensure that the person’s needs, not the illness remains the focus. It is therefore important to take time to get to know a person’s history, lifestyle, likes, dislikes hobbies and interests. I have found that the traditional arts, namely Irish music, song and dance are powerful connecting tools for the elderly living with dementia and can help meet their psychological needs for identity, comfort, attachment, social interaction and inclusion.

What A Music-centred approach can offer

We are inherently rhythmical beings. Our heart beat, circadian rhythms, breathing and walking are rhythmic processes.  Music is not just emotional and auditory, listening to music involves muscular stimulation and movement. We involuntarily feel rhythm and show this by nodding our head and tapping our feet or fingers to the rhythm of Irish music and dance. Live music heightens and enhances our emotional and physical connection with it and social interactivity with others.  To quote W.B. Yeats from The Fiddler of Dooney:

When I play on my fiddle in Dooney,
Folk dance live a wave of the sea.

Research has shown that the areas of the brain which respond to music are the last to deteriorate in dementia and this is especially true for people at advanced stages of dementia. The rhythmic nature of music raises the level of the neurotransmitter serotonin which can rekindle one’s voice and bring a prolonged sense of attachment, social involvement and inclusion. Revitalising a voice which has become silent with dementia has a symbolic connection with the blackbird in an old Irish anomonous lyrical verse from the 9th century ‘An Lon Dubh’ 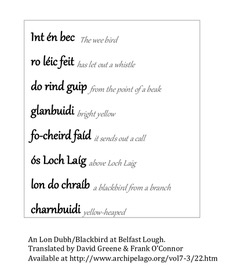 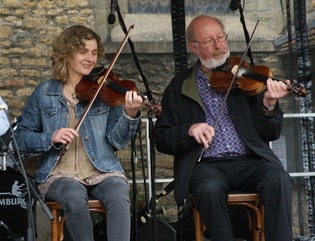 I grew up surrounded by a wealth of Irish musical traditions in Co.Clare in the 1970s and 80’s. I was artistically inspired from many evenings of music and storytelling with my neighbours Jack and Angela Mulkere. I chose the play the fiddle at the age of 9. I was drawn to it from my brother’s playing and the instrument itself which appeared tonally and mechanically fascinating. Music, for me, is a language of communication and expression where each note represents a personal mood, feeling or senario and playing the fiddle has given me the opportunity to explore this language as a performer, composer and therapist.

I learnt Irish traditional songs from my mother and Máire Ní Scolaí a family friend, actress and renowned singer. She created a unique style of singing where she successfully combined her classical training with sean-nós singing. Her vocal approach remains with me and is something I try to emulate in my air playing.  I also played and recorded with Na Casaidigh who introduced me to a repertoire of Irish songs and ballads which are an immediate resource for my therapeutic practice.

Dancing is a central part of Irish culture which I experienced from Irish dancing classes, ceilidh dancing in the Gaeltacht and playing for set dancers at ceilidhs and social gatherings. I have found that dancing is an immediate social energiser for the eldery living with dementia.

The Fiddle as a theraputic tool 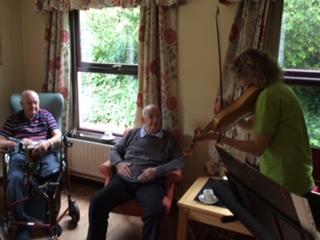 The fiddle has may qualities of the human voice making it a wonderful connecting tool in therapy. It is a live, expressive instrument where a wide range of sound effects can be expressed, as the player controls the formation and execution of a note, its timbre, duration, and dynamic.  I mostly use an octave violin when interacting with the eldery as the warm, deep timbre is an inviting sound to boost alertness and interactiveness. Because of its size and portability it can be played in close proximity to a person. This helps stimulate more immediate levels of alertness, resulting in a reawakening of gestural and vocal communication. I also use the instrument to assist song-memory recall of local familiar songs, love songs and Irish ballads. Ballads with stimulating repetitive choruses such as In Dublin’s Fair City and The Wild Rover especially appeal to this client group as the repetition assists memory recall and social interactivity. The bow stroke has very soothing qualities and this helps people relax to familiar Irish airs such as Danny Boy and The Coolin.  'Margaret' loved to listen to The lark in the Clear Air as it brough her a sense of calm.  She would then gesturally indicate a wish for a lively tune which I have re-created in the following video except:

This instrument is also ideal to encourage dancing/dance movement, an activity that uplifts the well-being of people living with dementia. Those who are still mobile enjoy dancing to waltzes such as Spancilhill and Carrigfergus, and/or reminiscing about the dance-hall days of their youth. Others love to dance in their chairs to never-forgotten tunes such as St Patrick’s Day and King of the Fairies, made famous by the Dubliners. The following video is in memory of 'John' who loved to dance in his chair to King of the Fairies and Lord of the Dance. This uplifted and energised him into chatting and recalling more tunes and songs, which led to the creation of a personalised playlist.

I have fond memories of music sessions in the homeplace with Francie and Brian Donnellan of Kilmurray and in Peter O’Loughlin and Paddy Murphy’s homes in Kilmaley. I was introduced to the pub session scene by Eileen O’Brien and others at Larkin’s pub, Tipperary. The Irish session is mostly a non-verbal musical communicative experience where musicans partake in tune playing intermixed with songs and conversations. It has a social etiquette and the session leader gives the cues and signals. These may be gestural, visual, aural or vocal. I quickly learnt that it was important to follow the etiquette of session leaders and developed great respect for these older musicians, the nuances of their individual playing styles and how they led sessions. One’s playing must be flexible and adaptable to copy the lilt and flow, tempo and style of a session leader when joining in to play. Jamming and improvising over the tunes played, as is common in other genres and styles, is not conventional in a typical Irish session.

Openess to listen and be musically flexible and adapatable in relation to tempo, timbre, mood, version and key of melody when communicating with a client are important asepcts of the therapeutic process, skills I initially learnt from the trad session scene. The modes of communication used in an Irish session are also invaluable therapeutic tools. Awareness of  non-verbal cues such as facial/body gestures and hand signals are crucial when working with people living with dementia, where words may not possble.

An Irish traditional session is a social inclusive gathering. People from different social and cultural backgrounds are free to join and the music played creates a social bond. When I lead sessions, I realise the importance of finding musical ways to include all present, a skill I continue to devleop every day in music therapy practice, most especially when working with the eldery living with dementia from different Irish cultural traditions.

At the time of writing COVID-19 lockdown has disrupted opportunities for social inclusive gatherings for people living with dementia. It is currently not possible to deliver live music therapy sessions but we can create video playlists as lockdown has encouraged the creative use of video as a social medium. Along with video playlists, I also use videos to communicate and offer comfort to families who have lost a loved one, for example 'May’s Helping Hand', a traditional air composed in memory of a kind and helpful relative.

My person-centred music therapy journey influenced by the fiddle and my traditional Irish background continues, in whatever medium possible, as often it provides the only meaningful link with the world where a person’s mind can be transported through sound to self-express, feel included and rediscover a sense of identity and comfort.